Kiscelli Museum, together with its 37 acres of forest park, is situated in the 3rd district of Budapest, on the border of two quarters: Óbuda and Remetehegy. The 18th century baroque church and Trinitarian monastery, ordered to be built by the Zichy family, were used as army barracks in the 19th century. In 1910, the complex moved into the possession of Miksa Schmidt, a furniture factory owner, who had it reconstructed into a castle; hence the name Schmidt castle. At present, the building is home to the Modern Local History Collection of the Budapest History Museum and to the Capital Picture Gallery, namely the fine arts collection.

In 2018, the building was largely renovated. The reception hall was renewed, there was a new exhibition hall built in the rock cellar and the engineering was modernised too. The following video gives you detailed information about the renovation:

The relationship between the Zichy family, Mariazell and Óbuda dates back to the 17th century. Zichy Pál I. attributed his escape from captivity to the miracle of the Madonna statue of Mariazell. As a sign of his gratitude, he donated a votive picture to the monastery in Mariazell, Austria. Leopold I. donated Óbuda to Zichy Pál’s son, Zichy István I., but the family could only settle down at the estate after the Turks were driven out of the country, in 1686. In 1702, in memory of the miracle that happened in Mariazell to their great-grandfather back in 1622, László Zichy and Péter Zichy made a solemn promise to have a chapel built for the copy of the devotional Mariazell statue. Northeast from where the castle stands today, they had a chapel erected in 1724, which the local, German-speaking population called Klein Mariazell, hence the name “Kismáriacell”. The shrine became countrywide famous and, starting from the 1730s, it was visited by an ever increasing number of pilgrims.

As a result of the negotiations started by the Trinitarian order in 1737 with the widow of Péter Zichy, the chapel of Kiscell moved into the ownership of the Trinitarian order. They decisided to have a new church and a new monastery built. The architectural plans were made by Johann Entzenhoffer, an architect from Vienna, between 1743–44. In 1745, the construction works of the monastery began. In the summer of 1748, monks already moved in to the west wing, while the construction works of the church continued throughout the next decade. The church was consecrated on the 8th of September 1760, and it is also when the copy of the Austrian, Mariazell Madonna – so far kept in the chapel – found its place on the high altar of the church. 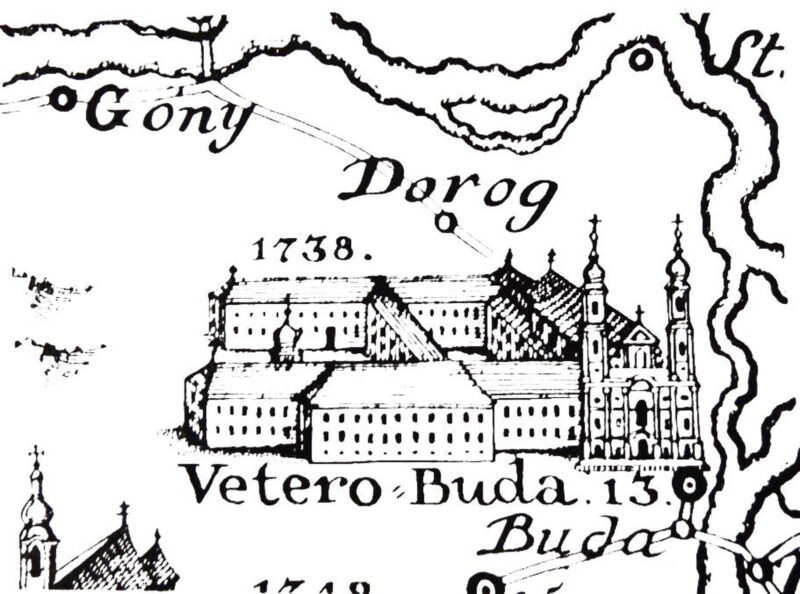 Johann Jacob and Joseph Lidl: Miniature view according to the original plans of the Kiscelli monastery, in: Mariazell and Hungary – The memory of a place of pilgrimage. Exhibition at the Kiscelli Museum of the Budapest History Museum May 28 – September 12, 2004. Catalogue, Budapest, 2004.

In 1783, Joseph II. supressed the Trinitarian order, and they were forced to leave the monastery. As a result, Kiscell, so far known as a famous place of pilgrimage, lost its religious importance. The furnishings were put up to auction. The Madonna of Kiscell ended up in the Saint Peter and Paul Main Parish Church in Óbuda. A painting by Maulbertsch, titled The Death of Saint Joseph was placed at the Hungarian National Gallery, while a painting portraying Saint John of Nepomuk found its place in the Saint John Church of Budaörs. The pulpit was taken to Solymár, the organ to Jászárokszállás, some of the benches to Jászberény. The only painting in Hungary portraying Saint Ivo was also taken to the Saint Peter and Paul Main Parish Church, and it was only two hundred and twenty years later, on the occasion of an exhibition held in commemoration of the place of pilgrimage in Kiscell (2004), that the painting once again appeared at its original place. 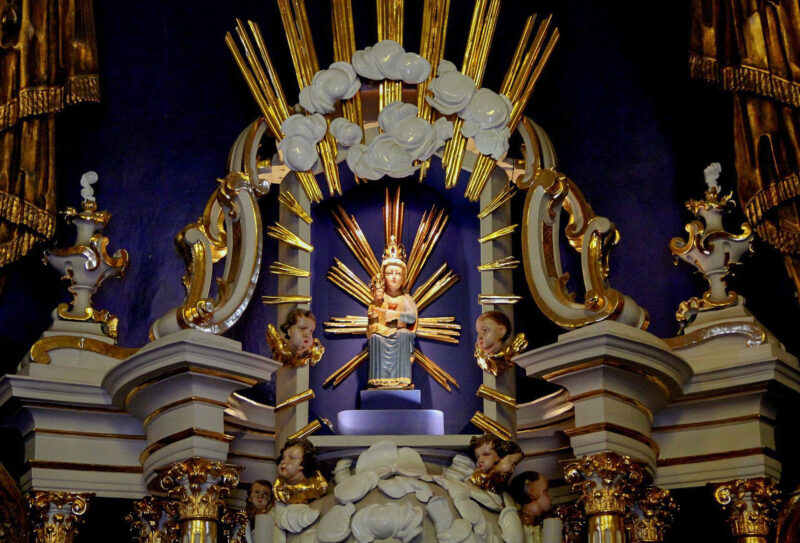 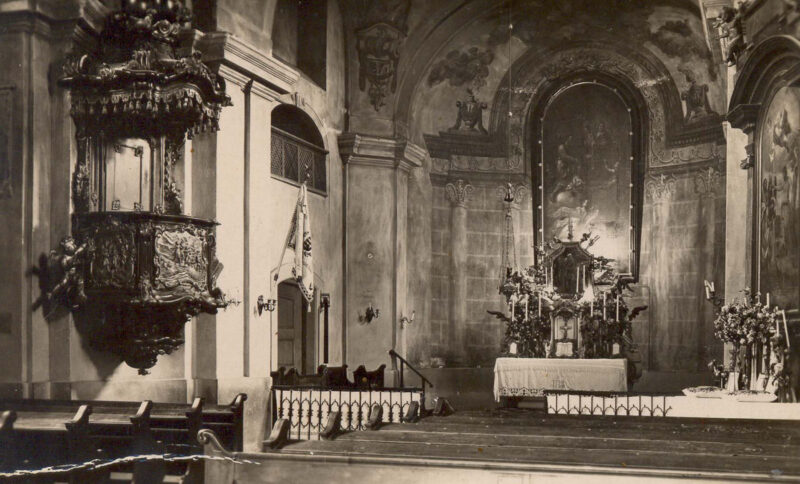 The pulpit of the Kiscelli church in the church of the Virgin Mary in Solymár,
http://solymaronline.hu/wp-content/uploads/2018/08/1903-as-templom-bels%C5%91.jpg 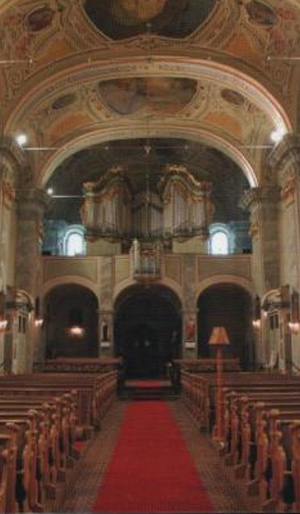 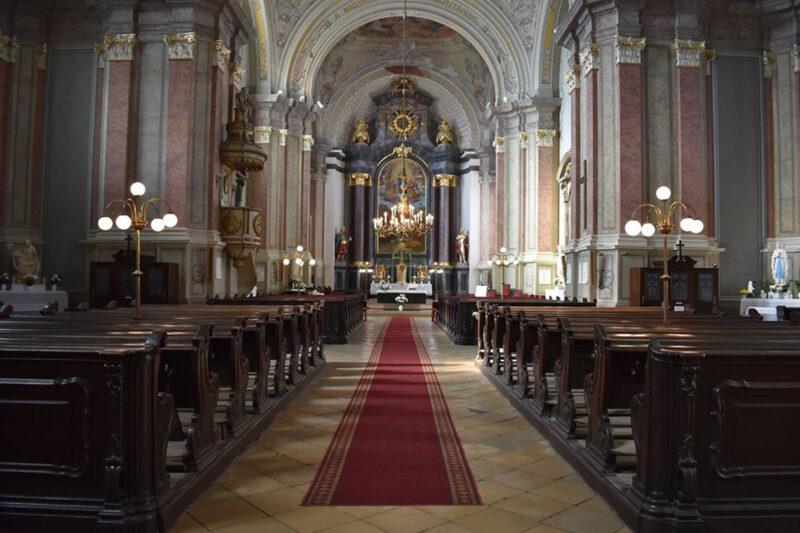 The pews of the Kiscelli Church in the Church of Our Lady in Jászberény,
https://miserend.hu/templom/1684

The church and the convent moved into the ownership of the treasury. There were a number of different plans about how it should be utilised. It was seen as fit to be used as a granary or a civil hospital, but finally it was converted into army barracks and a military hospital. During this time, there were some major changes carried out on the building. The two towers were pulled down to be level with the roof of the church, and the naves of the church were built in to form three storeys. Two more storeys were added to the north wing of the monastery and an extra wing was built next to the vestry. Already in 1786, wounded soldiers, who were allowed to be accompanied by their wives and their underage children, were tended for in the building. Ferenc Verseghy, poet, also lived here, as an army chaplain. The outbuilding was used as a military tool-shed. The building continued to function as a military hospital until the 1890s. 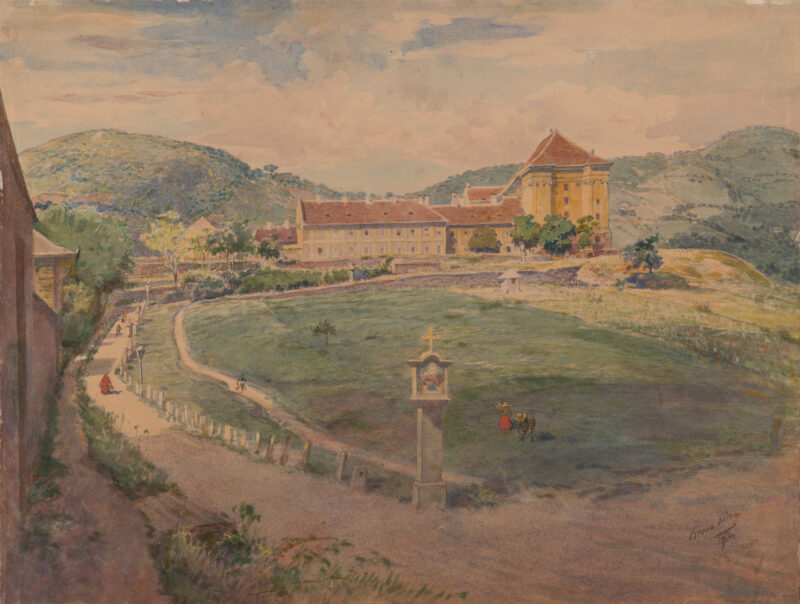 In the following twenty years, the building stood empty and neglected until, in 1911, Miksa Schmidt, a furniture factory owner from Vienna, bought it from the treasury, together with the lands surrounding it. Miksa Schmidt refashioned both the building and the forests belonging to it. He converted the baroque complex into a castle, paying attention to the conservation of its artistic qualities. Among other things, he had the gate of the Ministry of Defence in Vienna built into the southern side of the building of the monastery; today, this gate leads to the building from the courtyard. He furnished the halls with furniture manufactured by himself, and decorated the courtyard with sculptures. He surrounded the building by putti, vases and a coloured artificial stone fence. He also reorganised the park, which become inhabited by sculptures, promenades and terraces. That is how the building complex went from monastery to Schmidt-castle. Although Schmidt did not live in the castle, he often received his wealthy customers here. In 1915, he had a chapel made at the ground floor of what was originally a church tower, in memory of his murdered sweetheart, Elza Turcsányi “Magnate”. Miksa Schmidt died on the 1st of April 1935. He left the building complex, the movable property in it and the so-called Attila-park to the capital by will, under the reservation that the building should function as a museum and the park as a public park for the children of Buda. 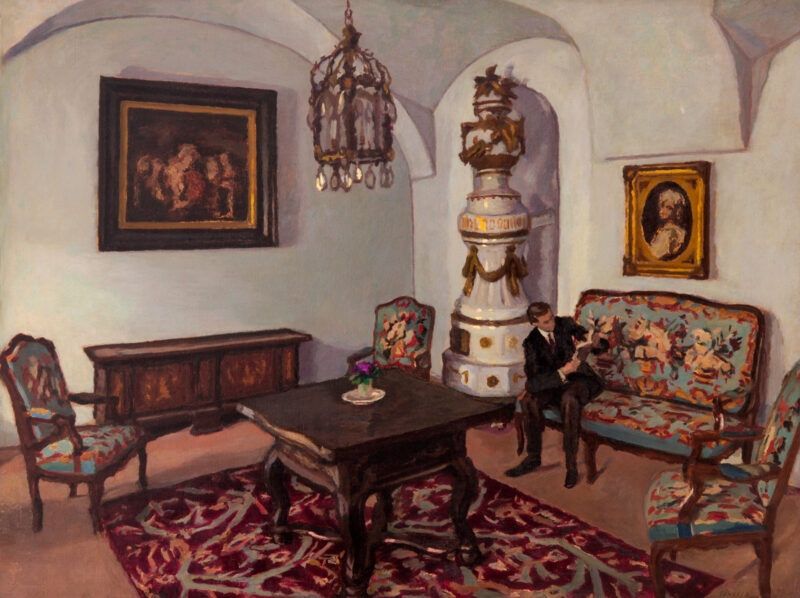 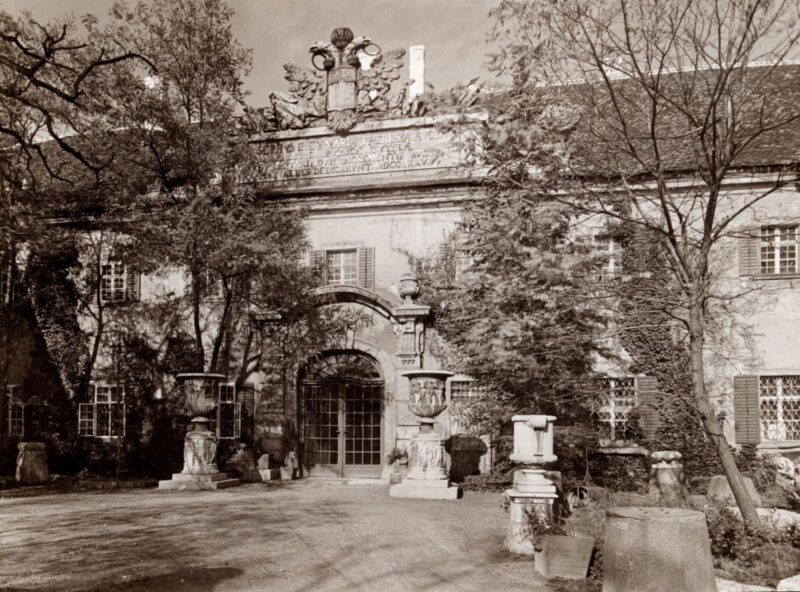 The city authorities, however, put most of the inheritance up to auction and the museum was established only much later. The Capital Town Museum became the proprietor of the building. Between 1938–41, the building was finally converted into a museum, and the local history collection was moved into it together with the fine arts collection. During World War II., the large majority of works in the park were destroyed and whatever remained was taken away by those living in the neighbourhood. The building of the museum, the former church and the collections kept here all suffered serious damage. The thick walls were still standing but the roof was completely destroyed. The dome fresco of Johann Gfall, which Miksa Schmidt kept at its original place, came to a miserable end. After the renovation, during which only the monastery was restored to its original form, the first temporary exhibitions were opened in 1949. These were followed by the first permanent exhibition in 1951. From 1951, the museum has been operating as part of the Budapest History Museum. 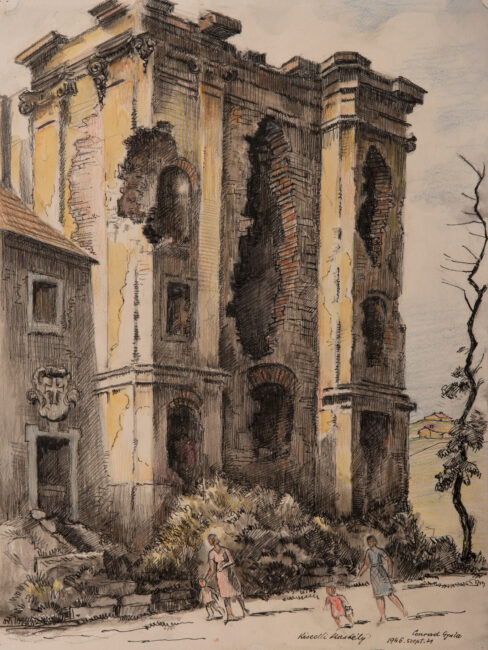 In the autumn of 1956, freedom fighter revolutionaries anchored themselves in the building, and, for ten days, successfully raided the Soviet troops pouring in from the direction of the Bécsi street. The church remained in ruins as long as until the sixties. The sun came in through the former roof that had collapsed, the ledges were overgrown with weeds, and through the empty windows, one could see a destroyed interior. Until the end of the seventies, only preservation works were carried out in this part of the complex.

The reconstruction of the building was carried out between 1976–1983. The roof timbers were rebuilt and the windows were walled up but the inner parts were not renewed. Today, this is the church ruin of Kiscell, where the Municipal Gallery organised its first collection exhibition.

At present the Kiscelli Museum is home to the legal successor of the Capital Town Museum, the Modern Local History Collection of the Budapest History Museum and to the Municipal Gallery, namely the fine arts collection.