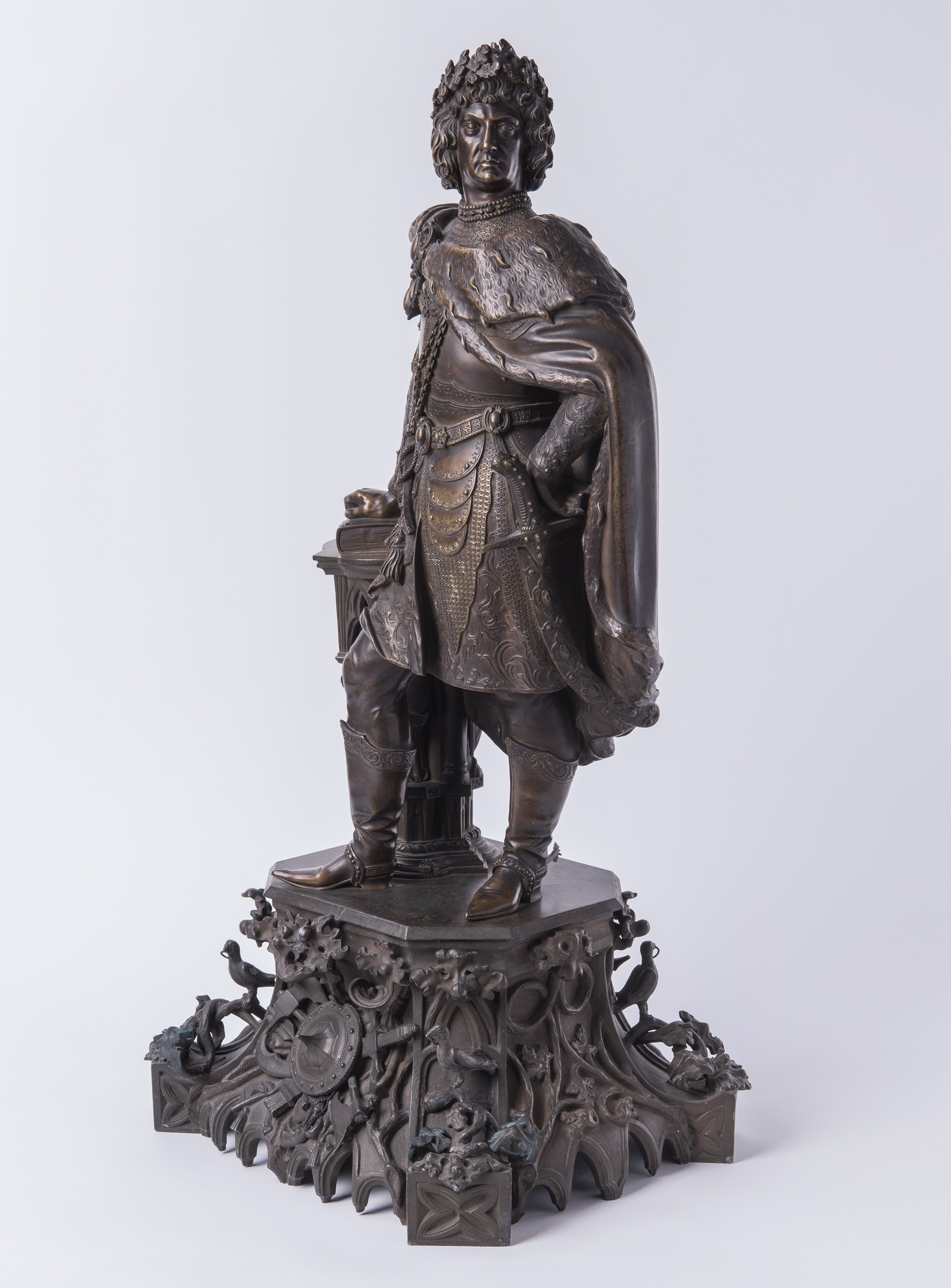 Alexy Károly (1823–1880): King Matthias, 1852–1861
bronze alloy, height 57 cm
From the beginning of the 1840s, Károly Alexy studied at the Academy of Vienna. His works exhibited there enjoyed general appreciation and he received several commissions afterwards, among others, for a 16-piece series of statuettes, portraying monarchs.
In 1839, Pál Nyáry, a politician of the age of reforms, spoke up for the erection of memorials of great figures of the past of the nation, first of all King Matthias, with the help of public contributions. As a result of the social and political changes brought about by the age of reform (1825-1848), the idea of independence from the Hapsburg Empire came to the fore, and the increasing demand for national autonomy was accompanied by a vivid interest in the glorious past. The small statue was made for a memorial of Matthias, the idea of which was probably related to the above mentioned efforts, but the memorial was never completed. Nyáry would have liked to entrust István Ferenczy, a significant sculptor of the time, with the creation of the statue and intended to finance the project with the help of public contributions. However, the erection of the memorial raised a lot of questions with regards to aesthetics, arts policy and public life, which escalated into a several-year long debate. The dispute included topics such as the person of the sculptor, the location of the memorial, the material of the sculpture and also the position of the monarch in which he is to be portrayed, as the memorial was supposed to strengthen national identity. The first, classicizing design made by István Ferenczy was met with the refusal of the public. They disapproved of the body position of the king, which was not majestic enough, and missed the national costume. At this point, the name of another sculptor came up. It was suggested that either Marco Casagrande – a sculptor of Italian origin, active in Hungary – or perhaps another well-know sculptor from Munich should make the sculpture. Then, in the middle of the 1840s, Alexy introduced his small figure, made of metallic alloy, to the public. Due to its patriotic character, it was met with success.
Alexy’s statuette portrays Matthias standing on a platform enwreathed by neo-gothic bines. He is wearing a period outfit and is depicted as the maecenas of science and art, with a laurel wreath on his head, instead of a crown. His right hand is placed on a book lying on a Gothicising table, the three compartments of which are ornamented by an allegoric figure of a woman each. The idealised image of the monarch indicates that Matthias was not only a humanist scientist but also a successful strategist.
The erection of the memorial, however, was never realised. The breakout and then, the fall of the revolution and war of independence of 1848, together with the retaliations that followed, altered power relations. Alexy took part in the fights of 1948-49 as an officer, for which he was sentenced to a longer imprisonment. Once he was freed, he emigrated to London.
Written by Viktória Oth 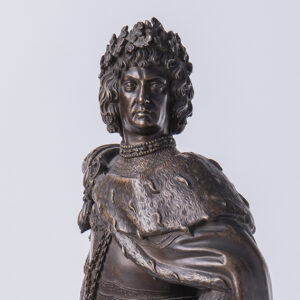